April 18, 2021: two giants in the current army scene, the Rebel Penguin Federation and the Ice Warriors, logged onto Ascent. We’ve seen this matchup happen time and time again, whether that was Legends Cup X‘s semifinals or the finals of Christmas Chaos X. Every time, hype fills the atmosphere of both armies; the collision of two brother allies is bound to be exciting. This practice battle – nicknamed “The Real Deal”  – was no less intense.

The first room of a battle is always a tossup, and especially so with both armies bringing a combined quantity of about 160 penguins. RPF ran around with “BLACKHOLE” x7, whereas the Ice Warriors entered with “JOEPENG” x8. That wasn’t the most striking thing about IW though, as they were also dressed in the Golds uniform to honor their retiring leader, Flamez!

As IW formed an upside-down T to counter RPF’s X form, the battle’s tone was set. Rather than shots at one another, big word bubbles like RPF’s “COWARDICE” x7 and “HTMLWIN” x8 competed with IW’s “RPFWHO?” x7 and “AWESOME OUTCOME” x3 for coverage. After a few minutes, IW pulled off their classic wipes across the room and moved out into a “GOLD RUSH” x6 rake. RPF boxed the Stadium after their “WMWMW” x10 bomb, with IW quickly following. Shortly afterward, RPF would rake into a plus form instead, but IW had the same idea. Great minds think alike, right?

Though both armies had similar in-room sizes, tactical word bubbles allowed for a victory for the Rebel Penguin Federation in the Stadium.

The two armies clamored Inside Mine quickly. IW bombed “BOOORPF” x8 as it entered an X form, and RPF created an upside-down V after chanting “WINNERS” x8. The big word bubbles continued, from RPF’s “IWDEFEAT” x7 and “MELTYOU” x8 to IW’s “AMONGUS” x8 and “WEEWOO” x9. There was no room to breathe – each army was eager to prove their dominance.

Halfway through the room, RPF waterfalled out with “BOREDOM” x8 and into an upside-down T – again, alongside IW! After a few moments, RPF bombed out into an X form instead. In this room, we also saw playful jabs at each other (“not the renegade spam,,” from RPF) and even at other armies. After all, envy is bound to be drawn by the community’s two dominant forces! It was all in good fun, though – two allies enjoying the competitive atmosphere.

With a slight size advantage and its iconic ability to cover the opponent, the Ice Warriors took Inside Mine.

With the armies having tied up the previous rooms, the stakes were raised. The Docks would be the room to determine the results. The Ice Warriors entered with a classic chant of “OURTOWN” x8, while RPF countered with “IWFOOLS” x8. As RPF entered an upside-down V and IW a plus form, it was already apparent that the former had an advantage in covering. Still, neither side let their guard down.

The theme of big word bubbles didn’t stop: RPF’s “EYESORE” x8 and “WEREIGN” x8 combatted IW’s “TOOCOOL” x8 and “PREPARE FORLOSS” x3. As the battle was winding down, both sides used more sentence-based tactics, such as “It’s such a shame, they always don’t like us because they ain’t us” from RPF (when CPR filters hate </3) and IW’s “Oh wait you are shivering, did we ice you up too much?” Even as RPF switched into a backwards L form, it continued to cover IW’s X form.

As both armies exchanged GGs, BIA judges declared the Docks a victory for the Rebel Penguin Federation.

For those who were unable to attend, this battle was a bit unique! Each room only lasted about 7 minutes. In the last 9 minutes, RPF and IW united under one theme – the Black Ice Alliance – to do some nostalgic tactics in honor of Flamez. On our end, we also rocked out to music in VC . It was a memorable time all around! 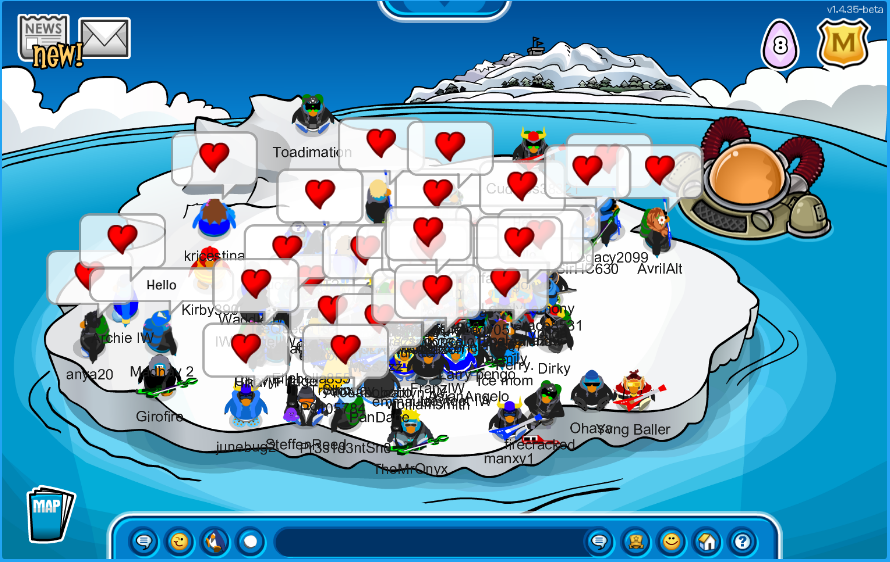 I think one tactic from the battle sums it up best: “The Black Ice Finals – it’s how it was really meant to be.” Despite the turbulent circumstances that led up to it, there really is nothing like going head-to-head against your brother allies. Nor could anything compare to the camaraderie we got to see afterward. After all, we’re all just a bunch of people who one day wanted to play Club Penguin again!

But I digress. Thank you to the 79+ troops who attended for us, the Ice Warriors for the amazing battle, IW’s Flamez for his unmatched leading (enjoy retirement!), and of course, you, the reader!

on a scale of one to pog, this is pretty champ
View all posts by brenatto →