Behind the Name: HCOM Edition

Hey Rebels, welcome to a cool little segment called Behind the Name, where Yip and I, Yvng, went around and asked the different members of RPF HCOM about the story behind their Usernames. So grab something to snack and drink on and learn about the history of your current HCOM members’ names!

“I chose this name in 2007 as a 11yr old on the og Club Penguin. I honestly don’t remember how I came up with that name, but I remembered the name when I created my CPR account in 2019 which is why I’m using it now. That being said, I love how people hypothesize about the meaning of my name/how I came up with it. One of the funniest ones I heard was that it’s basically 666, since F is the sixth letter, the number 6 and ofc, sixer.

“so [spoilers! be warned!] “brenatto” is the last name of one of my favorite characters from “critical role,” a dungeons & dragons web series. originally I tried using other names like widogast, nydoorin, etc. but those were all taken on CPRewritten, so here I am now, brento box”

“I’ve always been into astronomy, so I tried to think of a nick that related to it. I really like the moon itself cuz of how simple yet fascinating it is, so i went with that. Short and simple nicknames are also more appealing to me, which I kept in mind when coming up with one for myself.”

“ok so meaning of my name. 2 years ago when i found cpr i had to make an account and i was out of ideas of what to put, but because i was so excited to finally play club penguin again i was like: okay, im making a penguin (heres the “pen”) and i am a ho. this moment, Penho was born. The fact im Penho today is because when i got recruited, when i got to discord and it asked me for my name, god was like dont put ur real name and so i put my penguin name and here we are today. feels appropriate, right?”

Penguin + hoe – We keep it family-friendly in RPF

“Been avoiding this from the dawn of time because it’s a terrible way to get a name LMAOO. I usually make usernames based on things that I think sound cool at the time and so for discord was thinking how moji from emoji sounds cool so added an A instead of an E since other letters sucked and here we are. So basically I got inspired by aha …… emoji.”

“so when i first joined, i had to change my username and i was thinking what’s a cool name that would be really fun, easy to spell, catchy, etc etc. i didn’t wanna use my irl name because internet safety is very important! but ever since i got the nickname lanie from my two childhood best friends i’ve always just used it as my online name. so i changed my username to laniegg . but since people would come on cpr and ask me if i was an egg i ditched the gg part so i would just have lanie <3 i wish there was a cooler part to this story but that’s basically it!”

“I chose Link from the character link from Legend of Zelda. When I was younger my friends had given me the nickname Zelda. I didn’t wanna use it for an online think for some reason (?) but I still wanted something from that so I chose Link (who is a badass character). And the 3000 is from Avengers: Endgame, when Iron Man used to say “I love you 3000”. Iron Man is my fav avenger so I also wanted to include something from marvel”

“I feel like this is the chance for me to clear my name and say that I am NOT named after the Lil Nas X song. I actually branded myself as ‘panini’ because of Gordon Ramsay, my beloved. There was a Gordon moment that went viral where you see him call someone a panini head. I love Gordon so naturally I named my CPR penguin after him (paninihead), which I eventually transferred onto Discord as just ‘panini’ when I joined RPF.” 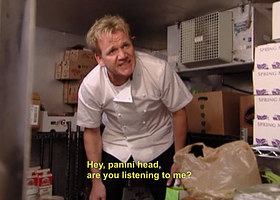 “I had a folder on my computer called youtube where I’d put random videos I would make, but I never actually uploaded them to youtube, so I was like well that’s a dumb name for this folder. So, I changed the name of the folder to “meming around”, but that shifted the folder up the list because they were sorted alphabetically, and I liked it at the bottom where “youtube” had previously been, so i renamed it to “zmeming around”. I liked the sound of it so I made my username “zmeming” and that eventually progressed to “z3ming” cuz that looks a lot cooler and sounds better.”

And that’s a wrap on Behind the Name! I hope you all enjoyed reading about the history of all of our lovely HCOM members’ usernames. Be on the lookout for a potential Behind the Name: Mod Edition sometime in the future. Until next time, this is Yvng Baller signing off!

Some guy was just like, ‘You rap fast, man. Like a little machine gun,' and from that moment, I was Lil Uzi.
View all posts by Yvng Baller →