On the 27th of March 2021, RPF battled the Army of Club Penguin in the March Madness semifinals. The battle took place on Club Penguin Rewritten, an in-development HTML5 CPPS. The original judgement of the battle made by the judges at CPA HQ, a CPA media outlet, is as follows:

Myself, Elex, and the rest of HCOM were in full agreement with this decision of the Judges. Shortly after the results were announced, ACP began to claim that the results were rigged and that the judges were biased towards RPF as shown in the following screenshots, all of which were grabbed from ACP’s server:

It seemed the fair judgement damaged ACP’s pride, and they proceeded to denounce the battle as rigged and declare the organization CPA HQ as controlled by RPF. There are few RPF-affiliated individuals in CPAHQ staff positions. However, CPA HQ is almost entirely staffed by individuals affiliated with WV and ACP, brother allies with each other and former enemies of RPF. ACP perceived a bias in a tournament practically organized by its allies simply as a result of a loss to an army which has proven itself as a superior force when it comes to tournaments.

Later that same day, ACP’s HCOM decided to appeal the result of the semifinals. CPA HQ acknowledged this, and began the review process without informing either me or Elex. After being reminded that they had to DM RPF leaders, Kingfunks, a CPA HQ Administrator sent these DMs to me:

Through the above DMs, Funks clearly acknowledges the fact that battle was close and the margins were very small. During this review process, not once were we informed about how it was going to be carried out, or who exactly was going to be participating in the review. ACP then provided “video evidence” to prove that they’d won the battle, without informing or sharing the said evidence with us. Meanwhile, RPF wasn’t presented with any opportunity to provide material to defend their case. We were simply given the assurance that it would be “cleared”. Fast forward to the next day and CPA HQ Admin DMT, posts a lengthy, bizarre and self-contradictory article wherein the results of the semis are overturned with a 2-1 score to favor ACP.

In the post, DMT writes that “lag” was a factor in the “erroneous” judgement, and goes on to claim the room was reviewed on the basis of “video evidence” from people who were supposedly unaffected, and pictures from RPF’s and ACP’s posts to overturn the decision. If the judges were indeed “lagged” until “:03” why were both armies not informed of this at the time? Why was the room not redone to ensure valid judgement?

Judges are meant to arrive at a decision in collective agreement. However, the article seems to show that this wasn’t the case. The article goes on to say, and I quote, “This led them to the conclusion that they would have ruled the first room an ACP win if they had been able to actually watch the battle”.  This directly admits the fact that judges decided the result of a room without being able to watch it. This implies a major issue with how judging was conducted, and more so it highlights the incompetence at play in that no stops were put in place, nor training provided to the judges to prepare for such a situation. Interestingly, none of the admins, including DMT, were watching the livestream of the battle as it happened.

The article claims ACP was faster in Room 1. Let’s look further into this. The following pictures were taken by various troops in RPF. Please note that the battle pics were not cherry picked. People are more than free to check the chat named #event-pics in the RPF Discord. We’ve also included photos of certain ACP attendees who are wearing the default CPR outfit during the battle. 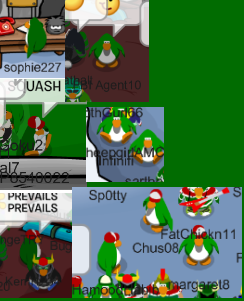 Looking at this, it appears most trained judges would come to the conclusion that RPF won the room, or at worst, tied with ACP. Yet, DMT and the review panel chose to rule that the room was won by ACP. Now lets look at the facts and start off with DMT as a review panel member. Ever since our ties with LGA ended, DMT has been known to post anti RPF rhetoric and has been outwardly pro ACP as can be seen in the following pics, some of which date to the time he was a judge for CPAH:

The judges of the battle itself were AustinFraud, SuperHero123 and Amber. Please note that Super is a current advisor and former leader of the Water Vikings, a brother ally of ACP and Austin is a former member of ACP. Austin attended for ACP in the fall of 2020  during the Fright or Fight tournament, which raised eyebrows due to the fact that dual enlisting was NOT permitted. CPAH took no action against Austin or ACP, despite his attendance breaking a rule of the tournament. Amber leads the Silver Empire, an ally of RPF, but also an ally of ACP. She was as close as “neutral” can get when it came down to the judging panel.

RPF didn’t choose to reject the judges in spite of their close ties to ACP because we expected CPA HQ to uphold their judges to a high level of professionalism. However, the events of today have shown that CPA HQ have lacked professionalism in the handling of this situation, having no issues in making decisions without consulting the relevant stakeholders. RPF is extremely disappointed with the outcome of events and this leads us to the question, why would CPA HQ choose to award Room 1 to ACP without allowing RPF to argue their case as well?

Well, there can be only one answer – Bias. The bias against RPF.

RPF have been, without a doubt, the most successful army in recent memory. What we see right here is an attempt to undermine RPF’s success as an army. It can be sugarcoated, or masked under the guise of professionalism, but to the RPF the bias is clear as day. The Rebel Penguin Federation will not standby idly while people operate in a manner governed by nefarious intent toward us.

To this end, Elex and I, formally pull RPF out of CPA HQ. We will no longer be participating in Top 10s, tournaments or interviews. Bias can be masked under the guise of professionalism and impartiality, but we cannot ignore it.

For all the lies that CPA HQ and ACP peddled today, I’d like to quote Prof. Valery Legasov’s line from the miniseries – Chernobyl.

“When the truth offends, we lie and lie until we can no longer remember it is even there, but it is still there. Every lie we tell incurs a debt to the truth. Sooner or later, that debt is paid.”