Since the arrival of the Elite Guardians of Club Penguin (EGCP), there has been an instant rivalry between them and the Rebel Penguin Federation (RPF). As the two largest armies in Club Penguin Armies (CPA) this rivalry appears to come almost naturally. In early 2018, the RPF would easily reach huge maxes, therefore when EGCP finally decided to battle us they were easily outnumbered. This left EGCP rather disgruntled as no matter how hard they tried they were no match for the RPF. The introduction of the RPF Strike Force has allowed EGCP to have a ‘fair’ battle, not based on size but quality of tactics and formations. However, with EGCP constantly relying on their allies (with their allies being seven armies) and RPF calling on their two allies in response, the battle isn’t ever ‘fair’. The purpose of this post is to show every army the true EGCP, and to make sure you know your allies well, as their actions can reflect your army.

The allies we referred to are called the New Viking Alliance (NVA). The NVA is a group of relatively smaller armies, with the intention of supporting each other to allow their armies to grow and learn from each other. By allying with EGCP the NVA have created an almost unstoppable force. The issue with this lies that when relatively small armies that aren’t part of the NVA battle an army that is, they end up losing every single time.

Another issue that arose from this alliance was a battle between the new army ‘Cuddle Kittens’ (CK) (formerly an inappropriate name that the army were forced to be changed by CPA Admins) and Lime Green Army (LGA). CK was invading LGA territory, an army that had already suffered loss of many territories due to the recent war between them and Recon Federation (RFCP), an ally in the NVA. Naturally EGCP were the first to ally with the new CK army, and called on the rest of NVA to help with the invasion. LGA in response required the help of their only allies, the RPF. Throughout the event the CK army started to repeat a number of word tactics that verged on abusive. These tactics were aimed at the RPF leader who was present, despite it being an LGA event. The entire event was shrouded with abuse, so much so that even certain army leaders in the NVA retracted their troops from the event and refused to continue participation. These leaders reached out to the RPF leader to apologise on behalf of their allies and make RPF aware that these tactics were not warranted or represented their views. EGCP were the main ally in this event, with several EGCP leaders supporting the abuse aimed at the RPF leader.

No RPF Troop would be allowed to insult another army in such a way as it breaks our first rule: ‘Be respectful to everyone’.

This apparently is not the case within EGCP, instead their leaders actively encouraged the abuse and joined in with it.
Naturally LGA had a successful defence, but this event was not entirely over. The Cuddle Kittens were banned from CPA and the punishment for those in attendance was to have their accounts banned for 48 hours. As a result, numerous EGCP members had their accounts temporarily banned including their leaders.

However, as EGCP had invasions of LGA territory scheduled, they weren’t going to allow a temporary ban to stop all of them from attending, knowing that LGA already have a number disadvantage against them. Instead they completely went against their ban and ordered all their troops banned to create alt accounts, showing a complete lack of respect for the CPA admins, the community and its rules. As a large army that is influential they should be helping the CPA admins enforce the rules and help the community, not tarnishing it and making their job more difficult.

After the concerns presented by this event we decided to take a closer look as to what goes on within the EGCP server, and things don’t get better. To start on a lighter note (because things do take a much darker turn),

Please note that the rest of this post will include information and images of offensive and explicit content. We ask that all readers continue at their own risk.

Now as I mentioned earlier, there is a natural rivalry between EGCP and RPF, that much is certain. Unfortunately EGCP appears to take a rivalry on a Club Penguin game much more seriously than one might expect. This casual rivalry has formed into absolute hatred on their part, and meant their leaders actively encourage this hatred and the lewd comments that proceed. However, the vast number of obscene images and language found within the EGCP server (that is easily accessible to anyone) is a matter of concern for all those allied.

Everyone is well aware that EGCP is a Brazillian-based army, with their first language being Portugese. Though I’m sure from communication with them many people will agree that although English may be their second language they have a comprehensive knowledge of the language and what is and isn’t appropriate.

Here follows a range of images of EGCP members using racial slurs including EGCP leaders. Under no circumstances should such language be allowed or tolerated and it saddens me greatly that leaders of an army that can easily influence young people would allow this to go on and actively use this language themselves. 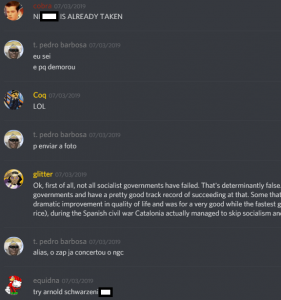 In this screenshot taken directly from the EGCP main chat, it is clearly evident with what level of respect EGCP treats racial slurs, to the point of encouragement to try other ways of fitting said slurs into account names. Here we see EGCP creating accounts on what we presume to be CPATG, again showing their complete lack of respect for the CPA community and the people from various cultures within it. The first person in question, Cobra, is an advisor to the EGCP, someone who influences the directions their leaders take the army. The second person, ‘equidna’, otherwise known as Dole is a current EGCP leader. Sadly, this isn’t the only instance of this slur being repeated, either, with results for the full n-word tallying at 93, and the number of results for the -a ending amounting to a whopping 477. However, the insensitivity of EGCP to those of other cultures is far from their worst offense.

Sadly, EGCP manage to out-do themselves yet again with their blatant disregard for humanity or concern for others when dealing with those they consider ‘enemies’. They have profoundly declared their hatred for RPF and those who lead it through arguments in the CPA chat and battles. This seemingly natural rivalry between the two armies has extended further for EGCP. The RPF Rebel Commander Queenieliz has been targeted on several occasions. Compared to previous male leaders, her gender has been used against her, with her being branded on several occasions as a; ‘cow’, ‘bitch’, ‘skank’, etc. However, these seemingly harmless insults are far from the worst.

This is just one of many messages within the EGCP server that discuss the RPF leader in a demoralising demeanor. The screenshot below comes from an EGCP moderator, a message that could be found easily in their main chat. However, this is only the beginning.

The indecent topic mentioned in the above screenshot was later furthered by another EGCP moderator into images. Note: The following images have been censored due to the pornographic content. 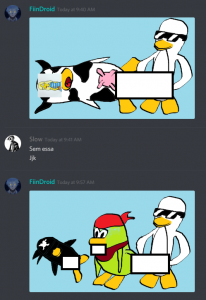 Here we see EGCP leader Slow acknowledge the images, yet take no action against them or the individual who made them. Clearly EGCP tolerates and supports these inappropriate things to be easily accessible in a community meant for children. These images and messages can easily be seen by any ally or visitor in the server. These two moderators in the server actively take it upon themselves to actively harass Queenieliz in-game on CPATG and make gestures to encapsulate the above images. Therefore, EGCP leaders either have a complete negligence over what goes on in their server, or actively support it. Well, we have reason, and evidence to believe it’s the latter.

After RPF’s successful invasion of Oasis, an EGCP territory, the EGCP leaders were naturally disgruntled. However, they again took out their hatred for RPF in a direct attack at the RPF leader, reinforcing the ‘jokes’ that had been made during the Cuddle Kittens event they supported. The following video is from EGCP leader and creator Cookky, who clearly had every intention of this video getting back to Queenieliz.

Unfortunately for EGCP, their attempts at taunting the RPF leader are to no avail, but the point stands that if they fully support their troops to harass an individual to this extent, what would happen in the case of someone who was more emotionally vulnerable and took these insults and harassment to heart? Especially with the majority of the community being vulnerable, naive children.

Now, after all the information and evidence that has arisen, surely EGCP are not victims of such racism themselves? Their leaders self-proclaim xenophobia and accuse RPF as one of these armies.

The remark they refer to in RPF being xenophobic is in one incidence over a year ago where an RPF troop entered their Portugese channel and said ‘burrito to you too’. The troop intended this as a light-hearted joke, due to the rivalry. In no way is this remark xenophobic, and in light of EGCP’s own actions and beliefs, it’s laughable they would even claim it so. They also recently accused CPA member Cena of making a xenophobic remark because in response to their speaking Portugese he replied ‘I’m sorry I don’t speak EGCP’, for which they demanded a formal apology off of him. Again, such hypocrisy from an army that are openly racist and sexist.

We ask the NVA to take a closer look at EGCP and ask yourselves, is it really worth allying with an army that defeats the point of your alliance in the first place (collectively supporting smaller armies) and potentially risks the safety of your troops? The influence EGCP has over it’s troops clearly teaches that sexism and racism is something to be tolerated, which in this day and age it simply isn’t. In this new CPA we have found the community to be a lot brighter, especially when all armies banded together to support RFCP on the loss of one of their troops. Sadly, this post shows EGCP’s toxic nature and their actions portray a complete lack of respect and regard for the CPA admins and the entire community. The Guardians have fallen, let war commence.