The first assignment of our newly assembled Strike Force team was Operation: Reclaim the Homeland. As we have successfully completed this mission the operation has now been declassified.

The server Tuxedo was the home of the Rebel Penguin Federation from it’s foundation in 2007. Unfortunately Club Penguin Rewritten did not include this server, but upon joining the CPA we noticed it appeared in another CPPS. The post Club Penguin Tuxedo server lies on the Club Penguin Armies: The Game CPPS. When the RPF joined CPA, Tuxedo had already been claimed as the Capital of the Lime Green Army. This is where our mission began.

Due to the rules surrounding the invasion of Capitals, we could not simply invade the LGA Capital without successfully invading all their other territories. The LGA had massed a great number of territories and with the rules surrounding only three invasions per day this did not seem like a viable option. Instead I spoke directly to the LGA Leader. We came to an agreement that the RPF would invade and capture two Pegasus servers in exchange for Tuxedo. This created the beginning of the RPF Strike Force and Operation: Reclaim the Homeland began.

The Beginning of Strike Force

Ulti was appointed as leader of the Strike Force, being a former Rebel Commander and recognised RPF Hero. Ulti interviewed and hired both current members and veterans of the RPF that he believed would be best for the job. Whilst we set up the Strike Force, the LGA underwent a change in leadership which caused the terms of our agreement to change. Eventually we returned to a similar agreement which exchanged three Pegasus servers in exchange for Tuxedo.

As our invasions began we were met with many unexpected obstacles. The first invasion was for a PZF-owned Pegasus server, held on Pegasus itself. However, many RPF users were met with difficulties. As most of us had recently made accounts on the CPPS, there were still a lot of glitches surrounding newer penguins being redirected to the wrong rooms, pages freezing, etc. This meant that unfortunately our first invasion against PZF was unsuccessful. Our second invasion was for a Pegasus server owned by EGCP. After our previous troubles we decided to battle for the land on a different CPPS, choosing CPATG. Yet again the RPF was met with technical difficulties, as the CPPS’ servers broke after 5 minutes of battle leading to this battle needing to be rescheduled for the following day on another CPPS. It was agreed the rescheduled battle would be held on CPPS.me. As the RPF had never battled on this server before, we were unaware of the spam filters. This caused many of our tactics to simply not show at all, and regrettably we had to admit defeat a second time.

When all hope seemed lost, and our Capital further from our grasp than ever before, the LGA leader reached out to Ulti asking if we would be interested in allying. Ulti directed them to message me, it was during this discussion we came to a final deal. The LGA leader had asked to ally with the RPF as they are also allied with Mopia and our mutual enemies EGCP are allying with a number of other armies. I decided to offer that in exchange for Tuxedo the RPF would ally and protect the Lime Green Army. This was quickly agreed upon by both parties.

This agreement was made at 20:10 BST on Sunday 7th July 2019, and the RPF successfully claimed Tuxedo as their Capital once again. 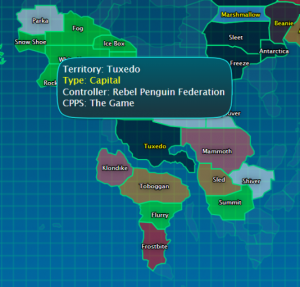