As it so happened, the Ice Warriors also declared their own war on Templars at a similar time.

Despite the fact that TCP is usually eager for war – at least, when they’re the ones declaring it – it seems that this was not welcomed by Templars’ leadership. 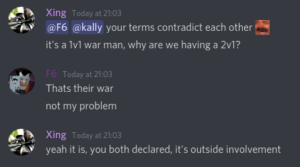 They and their supporters attempted to figure out a way in which our declaration was a violation of the CPAN league rules.

A separate war between IW and TCP, somehow counting as involvement in a war between TCP and RPF, when neither war allows allies?

Nonetheless, I’d love to say that TCP decided to grit their teeth, rise to the challenge and fight the war like they might have if RPF was half the size it is – their leaders’ talk sure seemed that way…

…but needless to say that is not what happened, because a grand total of 32 minutes after we scheduled our invasions…

If you strike at, imprison, or kill us, out of our prisons or graves we will still evoke a spirit that will thwart you, and perhaps, raise a force that will destroy you! We defy you! Do your worst!
View all posts by elexonck →