Home Uncategorized Down With Lance: The Conclusion

Down With Lance: The Conclusion

Well, you guys did it. You all finally bullied me into retirement. Down with Lance is finally fulfilled.

Just kidding. That’s a joke. Although the retirement isn’t, unfortunately.

It took me a long time to realize that everyone must move on at some point. Even after I came to terms with this, I still cried over every single retirement. This being said…it’s my time to go. (But you’d bet your ass that I’m crying over this one too)

Just a forewarning: I spent 18 months in RPF. I completely botched my TOTW speech. This post is going to be very long. It’s my last chance – I don’t want to miss a single thing.

I joined RPF on February 27th 2019. Two days prior, a real life friend of mine who often played club penguin with me  had told me about a battle she was participating in for this club penguin group she had just joined. I came and spectated, and even appeared in the post which you can see here. 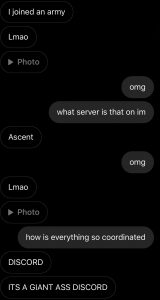 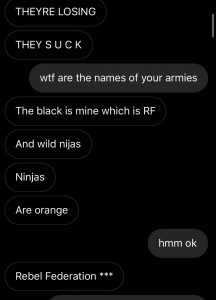 Two days after this, I ran into another event of the RF’s and joined on my own accord halfway through it, taking my very first event picture and earning my promo to Rookie I. 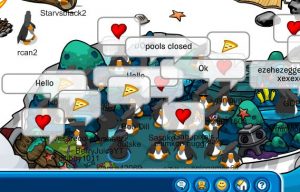 I could monologue the rest of my RPF experience but I don’t wanna bore you all to tears, so here’s a short timeline of my best memories:

6/2/19: Promoted to Brigadier General with F6 and Tanseh 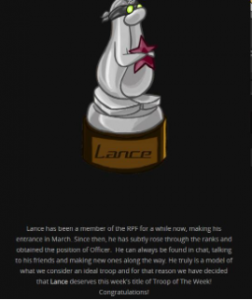 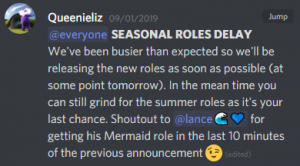 9/6/19: Lead AUSIA during class with F6 as a lieutenant general

Some other honorable mentions:

-Getting the chance to report for CPANN, CPA, and CPAM,

-Participating in 2 separate wars against EGCP

-The 3 and a half hour long EU mancala bracket (frick you, US mancala)

Throughout all these experiences, there have been so many emotional ups and downs. Happy crying, stress, frustration, but the one that tops it all is pure love for all of the Rebel Penguin Federation and everyone involved. Some of these special people are…

Tulia: for being the first person I ever considered a friend in RPF

F6: for letting me tag along with you to recruit all those months ago and helping me out as well as still continuing to stick by me as a mentor and friend and continuing to be one of my recruiting buddies to this day.

Mochii: you suck, but I trust you with my life. Does this even make sense? Va te faire cuire un œuf.

Star: my first (and last) mentor who had an incredible impact on my RPF experience, making me into the mod I was then and the HCOM I am today and showing me a kind heart always (despite terrorizing me with a certain someone…)

Owl: Not only dealing with my crap, but matching my energy. Those insane hours of Minecraft are some I’d never take back. Mentoring you and otherwise getting to know you has been an incredible experience and I’m so thankful to have you as a friend.

Rocket: My only competitor for the “loudest person in RPF” title. It’s been awesome getting to work with you in HCOM. You rock, despite the amount of times my Minecraft deaths have been caused by you.

Lotte and Zhark: Y’all have supported me every single step of the way. I could not ask for a better group of friends.

Moon: My best friend in RPF – you always have been there for me even when I make stupid moves. Recruiting, VC for hours, Minecraft… so many memories. You know how much I appreciate you.

Koloway: The very first person in RPF I looked up to. Thanks for giving me my motivation to kick off, and teaching me to fight the good fight. Thank you also for teaching me that I have the ability to rise above other’s opinions of me.

Commando717: I owe this all to you. I hope I made you proud.

If your name isn’t mentioned, please know I still love and appreciate you from the bottom of my heart. Each and every one of you from February 27th 2019 to today have made my RPF experience so incredible. YOU did this. Never forget how freaking awesome you all are.

Whatever name you know me by, whether it be Klance42069, lemon lance, blueic33, glance, cherryl0lipop, lance alt, rainbow boy, razb3rrytea, BHT, anlec, xapplejuice, Alexander Hamilton or just Lance, I hope I had an impact on YOUR RPF experience. RPF saved me, and I have been aiming to give back to the community ever since I got staff.

So…what now? What am I going to do now that I don’t have to dedicate my time to penguin war??

Well, I’m heading into my senior year so I’ll be studying hard as well as applying to art school and working on new pieces! I plan to take some time to get back into my other hobbies, such as cosplay and soccer, as well as focus more on school.. I also have plans to travel the world  and meet some of the people who have had an incredible impact on my life, covid permitting. This is my formal retirement from armies for the foreseeable future – It’s definitely time to step away from being on my computer 24/7 and focus on real life.

You’ll also catch me around RF still, running the art division with a few of my friends – so if you want to keep in touch, you’ll always find me there.

It’s so hard for me to say goodbye. It hurts so much to formally exit from the place I have called my home and the people I have called my family for the past 18 months. But I always told Moon that I would know when it was my time to go – and I realize that now is that time. But don’t worry – I’ll still be around to chat. I could never leave my friends and the wonderful people in this army. I also like to believe that, eventually, I’ll be back. RPF holds a special place in my heart and I wouldn’t put it past myself to rejoin when the time is right.

In my last few moments as 3ic I want you all to know that leaving is one of the most difficult choices I’ve ever had to make. I’ve made so many amazing friends here. So many incredible memories. The adrenaline of battles, the thrill of leading your branch to victory, the fast paced beat of a training event are feelings that will forever be engraved into my mind. I hope you all enjoy your time in RPF and make unforgettable memories – they always say you don’t know what you have until it’s gone.

I love you guys so much. Thank you all for the incredible memories, and keep fighting the good fight, always.

sometimes, it just be like that.
View all posts by klance42069 →