We logged onto Tuxedo – Town today in our uniforms and went to the Iceberg, Docks, and Inside Mine! We maxed 178…. wait

No that doesn’t sound right….

Howdy! This is going to be a long letter, but if you know me – you know how much I love talking! So now I’m going to sit down and write a lot!

If you don’t know me, hello! I’m Rocket, or Roqusy, or Racuzzi, or band kid…. The list goes on and on, but I’m a 3ic here at RPF. I’ve been here an astounding 18 months, and 8 of those months I have been serving as a Third in Command. How did it all begin?

Now, you might be asking yourself, “So you got recruited on CPR and then started being a troop?” Nope! Haha, as funny as it is, I was Discord recruited by Silverburg on March 25, 2019. He had found me from a now defunct Discord community for Box Critters called Discord Critters. With the simple words,

“Do you play club penguin rewritten?”

he had convinced me to join. Back then, I was just Roqusy, and I had an incredible time being thrown into the culture of Club Penguin Armies, and the fun of being a troop in a huge army! At the time, RPF had just formed its own divisional server from the main hub Rebel Federation, but was still known as Rebel Federation: Club Penguin Division back then! It wasn’t until June of that year that we became the RPF again, but I’m getting ahead of myself.

I officially joined the server on March 26, 2019, and my first event was Operation: Nacho Libre, where I would become a Private after my first event. 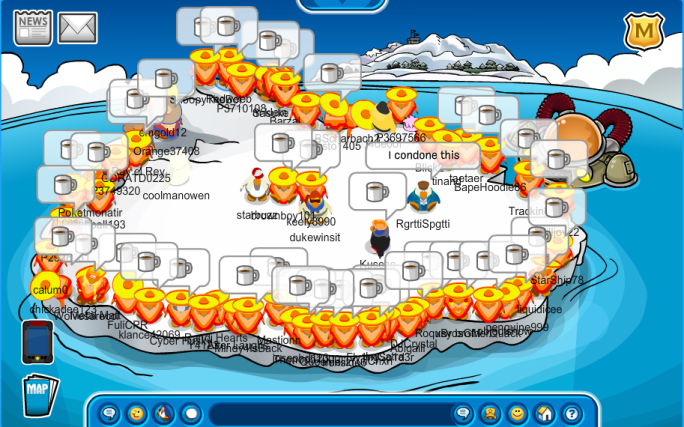 I was promoted every week until Colonel, sometimes being double promoted, where I would spend a whole month at a wall figuring out how I could improve my activity and demonstrate I was ready to become a staff member. It was then that I began meeting some of my closest and greatest friends of my RPF experience – people I would laugh with, cry with, have late night voice chat sessions screaming about anything and everything, playing games together. I ranked up with them through the mod ranks, and even got to become HCOM with them. If you had told me when I joined the RPF that I would get a yellow name color as 3ic, I would have never believed you – but to my surprise that’s where I ended up!

I’m already rambling but I will say that the story gets most interesting in June, when school was out, and RPF was in! We began having seasonal roles, and I studied others as I became a recruiter myself, dming moderators and HCOM to log my recruits as I earned my roles one by one, Explorer, Lifeguard, Surfer, and Mermaid! These were the first of their kind in a long while, and we’ve used them ever since every season! (Friendly reminder that Harvest Moon is a beautiful role that you can get right now!) 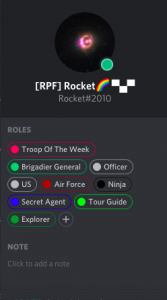 On June 21st, 2019, on my Mom’s birthday, after an invasion that I MISSED sadly because I was in NYC, I was awarded Troop of the Week! I freaked out, and I was so excited seeing all the pings come rushing in – I couldn’t believe it!

Just two days, on June 23rd, I was also promoted to Brigadier General! I was still hot pink for the whole week, but that was one of most exciting weeks in my time at RPF. 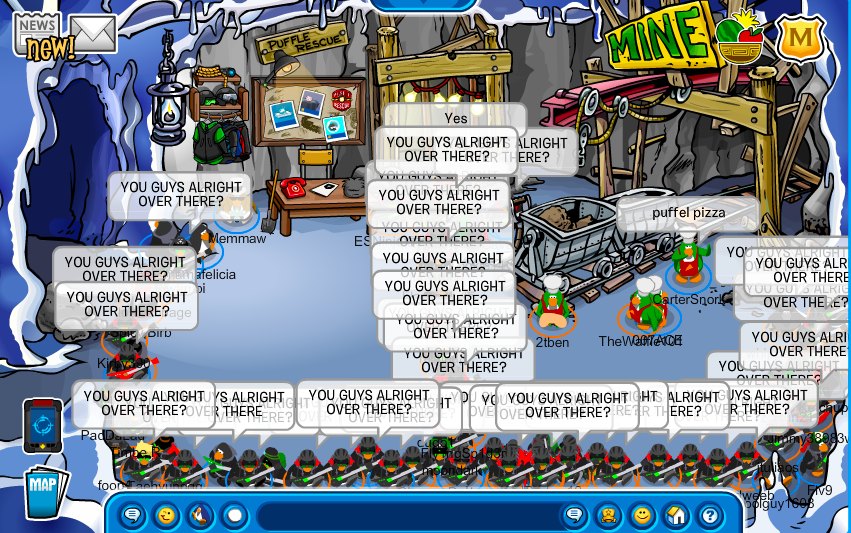 I kept enjoying our events, this time as a mod, as we faced off against EGCP, allied with the Mopia, had some Puffel Pizza after a nice invasion of Pizza Federation, and enjoying the 2019 Island Adventure party! It was during this party that I recruited Crazzyhead, but you know her as Crazzy, one of the current Rebel Commanders! To this day, I’m so happy of Craz’s accomplishments as a leader, and I’ve seen her growth as friends and as a mentor to me! She is an incredible leader, absolutely hilarious, and so fun to be around, and I hope she has CONTINUED success after I’m long gone!

Just as the fun was amping up and the Summer Olympics were approaching, I went to Norway and Iceland for 2 weeks, completely cut off from RPF – so I went on leave for the first time. To my absolute SHOCK, so much happened in just those 13 days! My recruit, Crazzyhead, got Troop of the Week, the team I was on in Summer Olympics 2019 lost, and Team Claw prevailed (a recurring theme), and The Good Fight Podcast started up thanks to Emcee, Chaos, and Moondog! 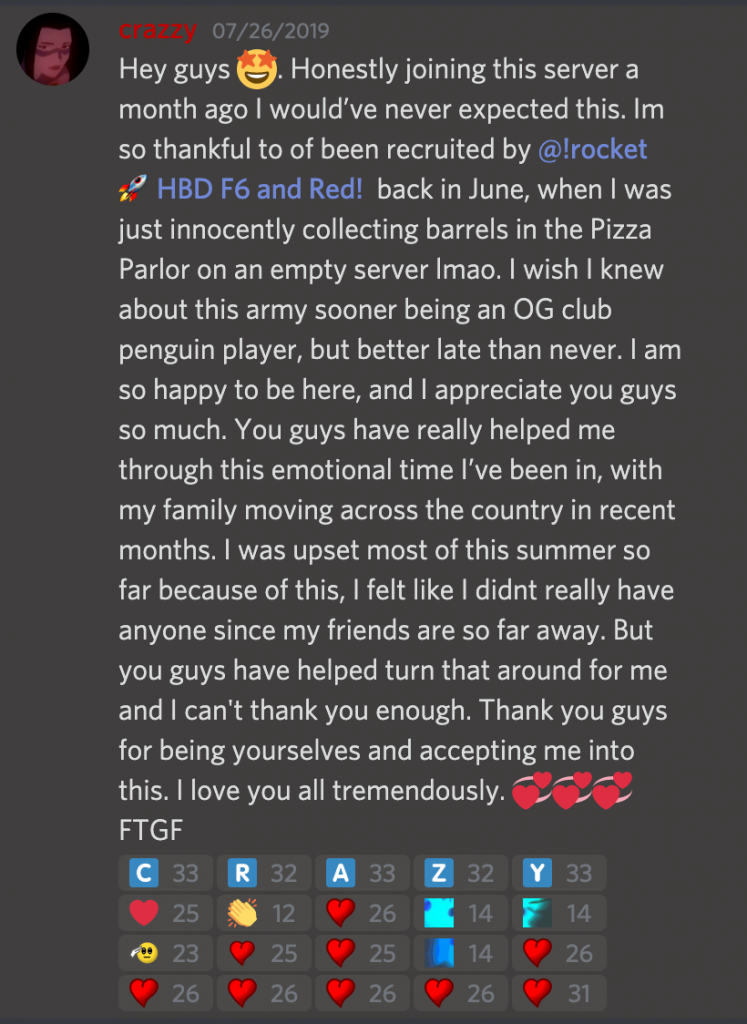 I loved being back, and became a General, which was Head General at the time in September. The fall was a WILD time to be in RPF, particularly as a staff member, and anyone that was HCOM or an Officer at the time can attest to that for a VARIETY of reasons. I had really gotten into leading at the time, and during a particularly close branch battle with Air Force against Navy, our leader at the time, Starship (who, funny enough, wasn’t Air Force, but since we had no Air Force HCOM available, we had her – we love you Star <3), lost wifi during the battle – so I hopped right in and won the third room against Wolves. We still lost (nononononono moment), but I had a heck of a time leading, and I would yearn to lead more in the upcoming months!

Amidst all the chaos and excitement around Winter Olympics (Reindeer Sleighs and we won that Olympics in our hearts), the Christmas party on CPR, and the Holiday Championship hosted by CPAM, December was a great time to be in the RPF – as we maxed over a hundred! I paid money for wi-fi on my flight to Colorado to attend that, and logged on so we could hit that goal. I’m insane – I know. (I also later attended Strike Force on my phone on a plane later that day, so there’s that!).

On January 20th, 2020 (new year woo!) I was promoted to Third in Command, where I am today! I totally screwed up by putting my first event ping in #announcements but hush hush I’m competent! I enjoyed holding a break day Box Critters event, and I began working as a part of HCOM! One of the things I’m notorious for is making all members of HCOM meet up for a group picture on the iceberg, but due to time zones and KLEIN’S MOM NOT DRIVING FASTER – we decided I’ll just photoshop pictures instead, and from February onward, I have pictures of all the HCOM groups monthly! 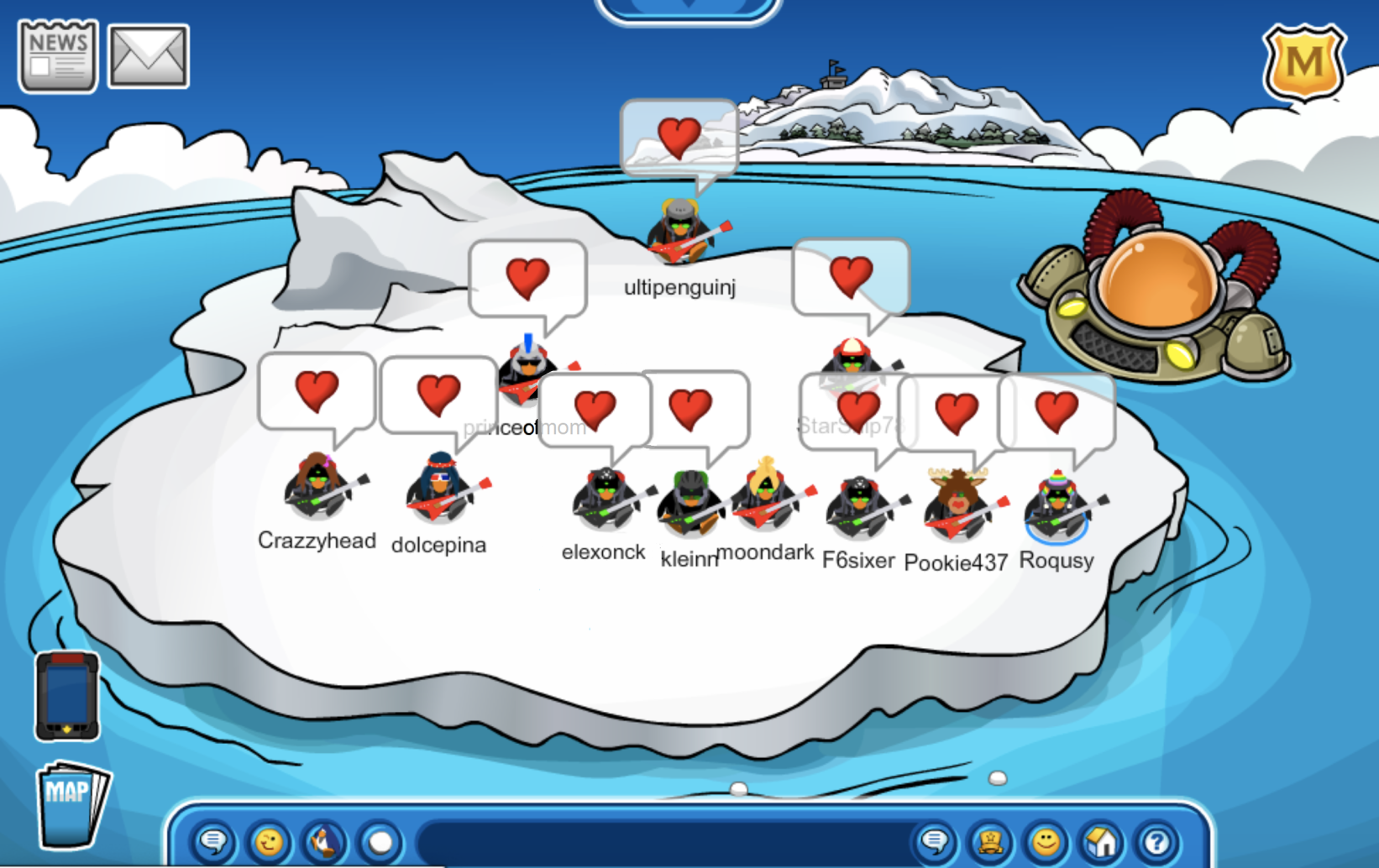 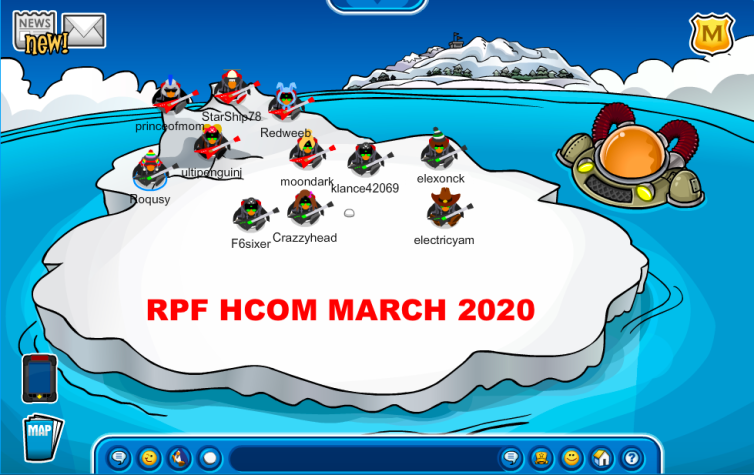 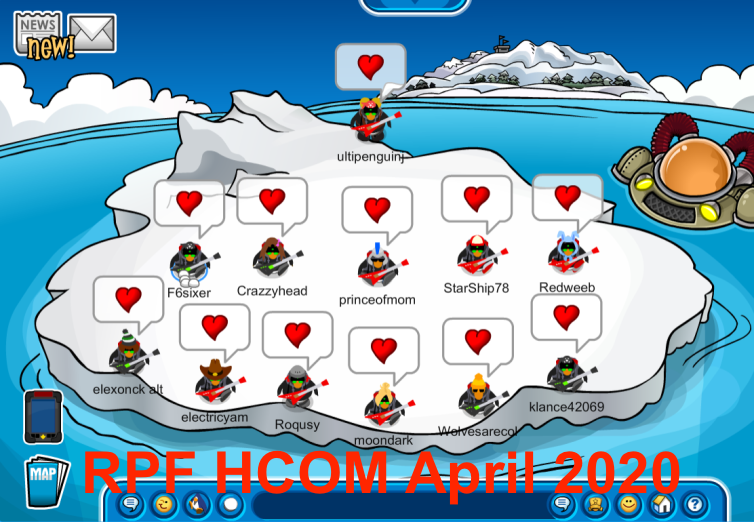 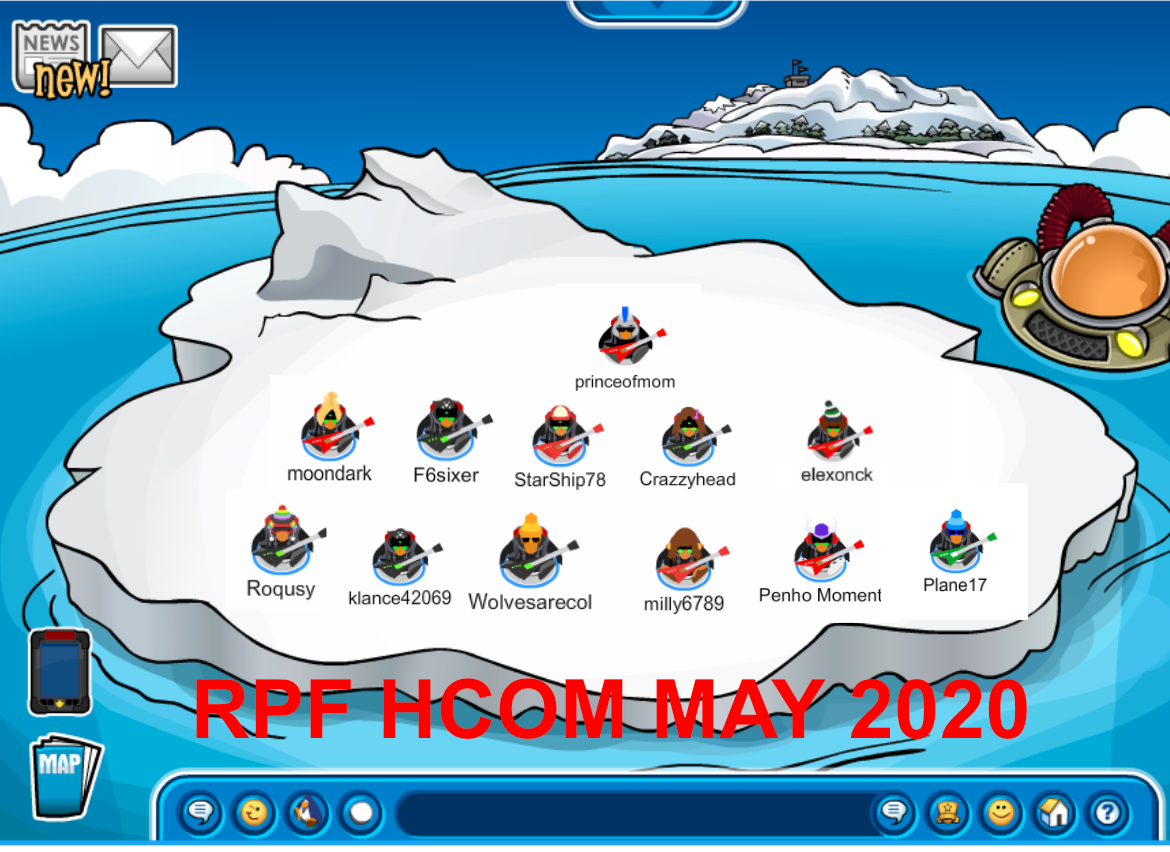 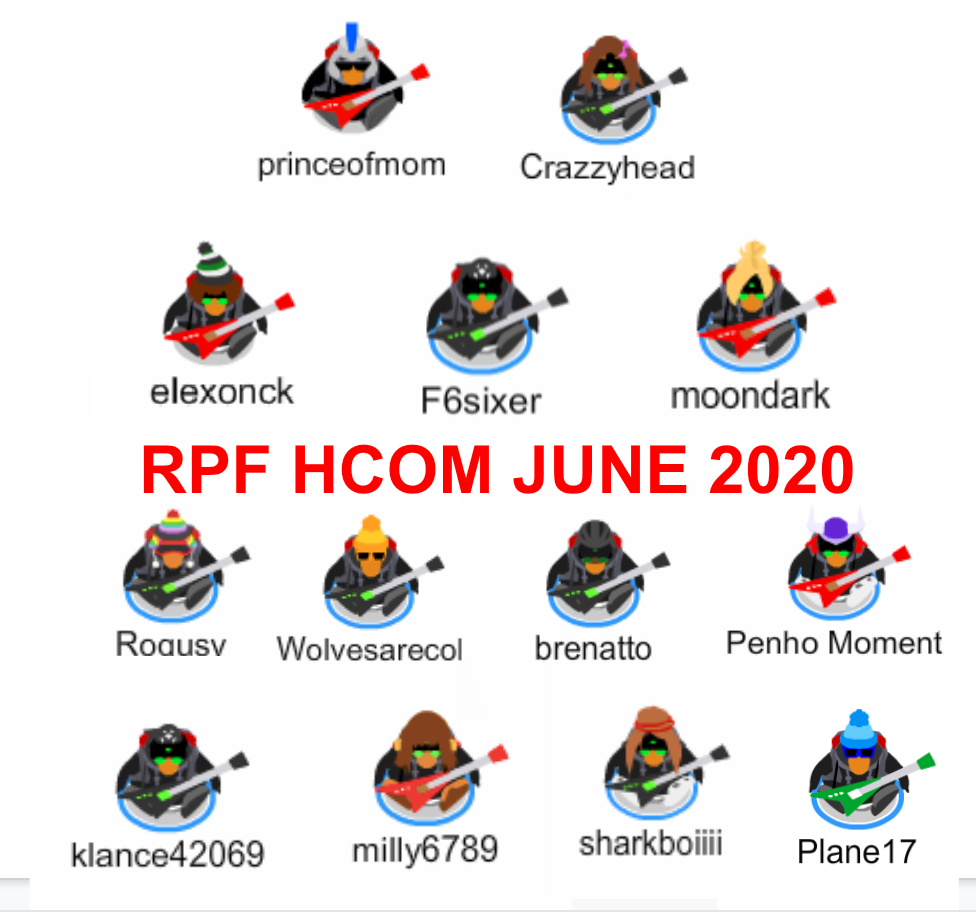 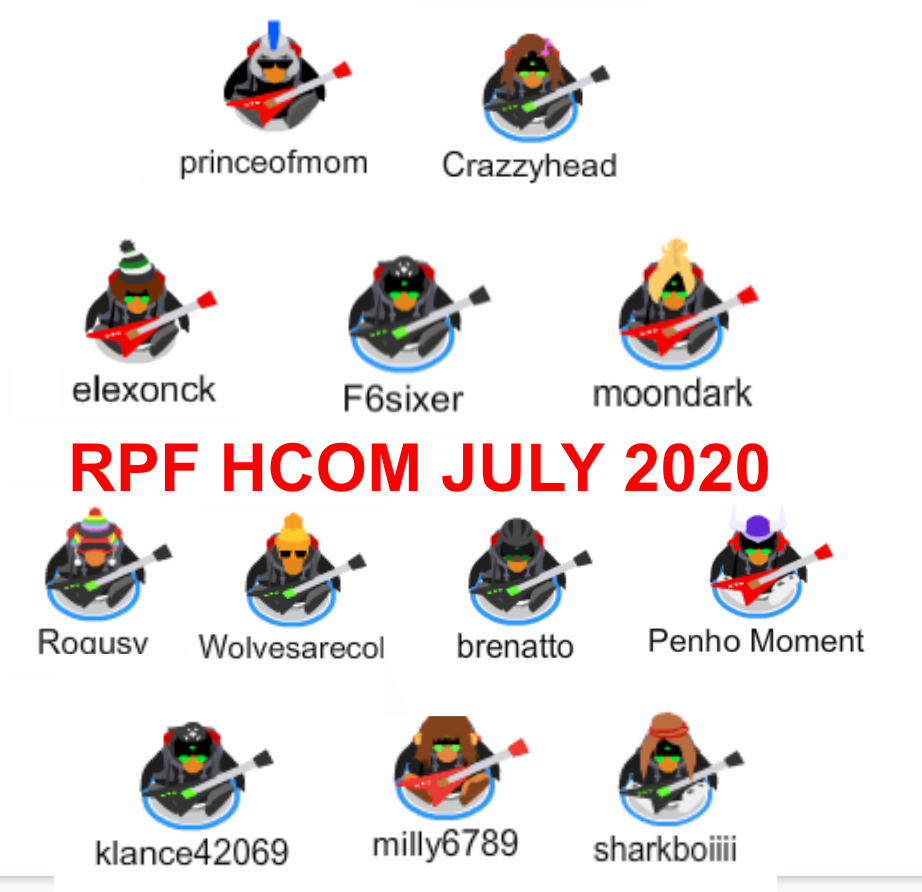 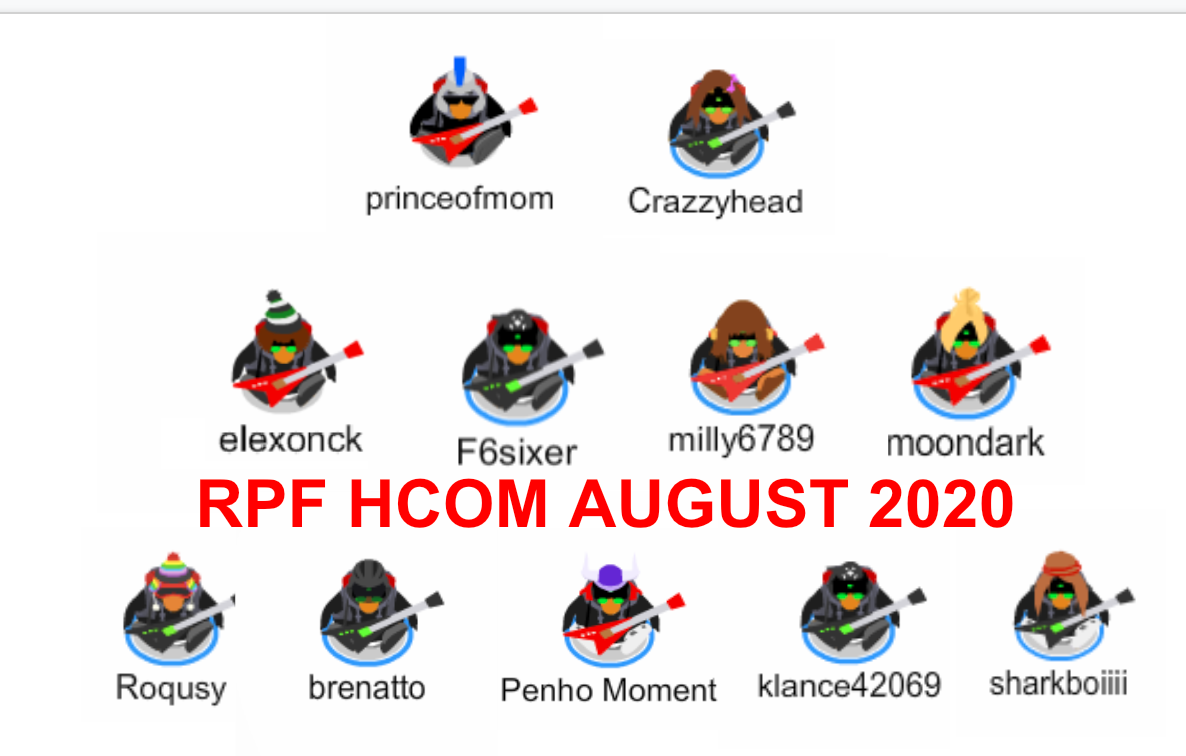 After a long journey, I could recount every fun and exciting moment of my career from March 2019 until now, but that would be 100 pages – so here’s a bunch of screenshots of me doing wacky things with my friends!

And I also wrote a Summer Recap detailing our adventures about here!

When I joined, we had 310 people in the server, fresh off the oven as a brand new server for the CPdiv to move to – and just last month we celebrated 10,000 members in the server. To all the CPR recruiters, to the Reddit recruiters, to the Social Media Team, to the everyday troop and the most hardcore officer, you all made that happen! I wasn’t the best recruiter, but it was always fun with a friend by your side.

I was originally going to write out pages upon pages of thank yous to people, but I think it’s more special if I give those thanks to them myself, and with my actions. But, for everyone, thank you for everything you’ve done to be helpful, friendly, uplifting, empowering, artistic, and hilarious – I loved every moment of our time together.

A list of extra special thank yous to those that endured the craziness that is me:

What happens now? I’m going to get working on High School and get my life together. I may still be around main hub and RCF, the division I run for Box Critters (check it out), but I probably won’t be around RPF too much. Please don’t be afraid to reach out in DMs with me! I always love you to hear from you all. Troops, Staff, Friends, and Strangers alike, you mean the world to me. For the final time I say, FIGHT THE GOOD FIGHT.

Since my first words were Howdy, it’s only fitting to sign off with a Yeehaw.

I've lived a long time, but not long enough. Keep on living, and be empowered by your quest to always yearn for more. <3
View all posts by Rocket →