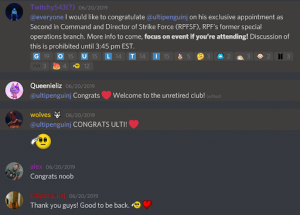 Lowkey probably wasn’t the word I should have used, huh?

Almost exactly a month after my iconic statement, on June 20th, I returned for the rank of Second in Command. My return also coincided with the return of the Rebel Penguin Federation, technically,  as we entered our new era. See, back then, we were the Rebel Federation: Club Penguin Division. We were just a gaming group that dabbled in Club Penguin Rewritten and didn’t interact with anyone else on the army scene. Tired of that, we returned to the historic name of Rebel Penguin Federation along with our return to being part of an army league.

My goal had been set: to help establish the RPF in army communities again.

To give you guys some background, I’ve done this all before (only click that link if you want peak 2015 cringe). Led RPF multiple times, retired multiple times. This was one of the main reasons I got the rank I did when I rejoined, or why I was chosen to lead the Strike Force. I had the experience of being in armies before Club Penguin shut down, from 2013 to 2015. This was something none of the HCOM at the time had, so Twitchy and then Rebel Commander Queenieliz decided to take a chance on me.

At least, well enough for me to get promoted to Rebel Commander for the third time on August 4th. Liz would later retire, leaving me at the helm of the Rebel Penguin Federation in the midst of some internal struggles and turmoil. Despite all of that, there was work to be done. 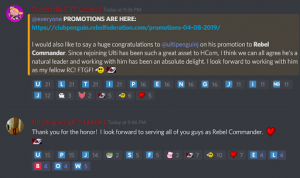 Throughout the rest of 2019, RPF dominated the Club Penguin Armies league with only its Strike Force, claiming land, winning wars, and dominating tournaments. We also had some other fun along the way. By the beginning of 2020, Strike Force was no longer needed as other armies could overtake the size of our special ops. This occurrence coincided with the death of Club Penguin Armies and the rise of Club Penguin Army Media, and presented us with the chance to begin incorporating all of RPF into the army community.

Then coronavirus hit, and people were forced to stay inside and play Club Penguin!

Never in my wildest dreams did I think RPF would be casually hitting 100+ while I was Rebel Commander. I never thought we would break the AUSIA record of 80 multiple times. I certainly never thought we would hold an event that would bring 178 people, breaking the all time record. We expanded our dominance even further, with more tournament victories and a stellar, undefeated record in World War Rewritten.

It was about this time that I realized my time in RPF was coming to a close, having achieved all of what I set out to do in the first place and so much more. With no issues bringing people to events, I busied myself making sure RPF would be in a good spot when I left. People taught each other how to recruit, how to battle, army etiquette. The culture changed for the better. When I had rejoined in June, it was only mods who would recruit. Most of HCOM was lazy and spent too much time infighting. Troops didn’t know or care. Rarely did new recruits actually stick around. There was no trust among staff.

Now? Oh my God, it’s so much healthier now. HCOM communicates with each other and with the rest of the staff. People actually share responsibilities instead of worrying who will be yelled at next. Everyone recruits, from Rebel Commanders to Recruits themselves. The people in main chat are kind, helpful, and friendly. RPF remains the dominant force, the best army on Club Penguin Rewritten. And I’m so proud to have seen how far we’ve come.

What comes next, I can’t say. The landscape of Club Penguin armies continues to change daily, and no one can predict what will happen next. Whatever it is, though, I have full faith in the current leadership to be able to deal with it head on. Cosmo has had previous experience at the position of Rebel Commander, his staff is full of incredibly capable people, and the RPF is at one of its all time high points. I will be sticking around in an advisory position to continue making sure things are as smooth as possible (especially with all of the ongoings in the Club Penguin Community), but my time as leader has come to a close.

In short, I accomplished my goals (and way more). Now it’s on you all to accomplish yours and keep the Rebel Penguin Federation rising far into the future. No matter what rank you are now, or how long you’ve been in RPF, you have a chance to make your mark. I was recruited by a Private named Keane8 who retired the week he recruited me. You never know what impact your effort now will have down the line.

As all good retirement posts have, here’s a list of some of the people I’d like to thank, in no order:

No, really, thank you to all of you guys for making this an amazing run in RPF.

HCOM, you’ve supported me in making RPF the best it can be for everyone, you work hard, and you’re the best staff I could have asked for. Don’t let RPF slip back into the unhealthy, elitist, toxic atmosphere it used to be. Work with and help others, even if it’s not for your own immediate gain.

Officers and Cadets, your work may feel heavy and hard, but it does not go unnoticed. You form the backbone of what we do in RPF and I so appreciate the time you put in. Whether you’re striving to be the next HCOM or not, you guys are amazing.

Troops, I hope my leadership in RPF has been the best experience possible for you. We do our best to not just be an army, but a fun community that you can look forward to spending time in. At the end of the day, it’s all for fun.

Vets and visitors…y’all are cool, too…

Extra special thanks to:

To all of you who read this post: you’re amazing. 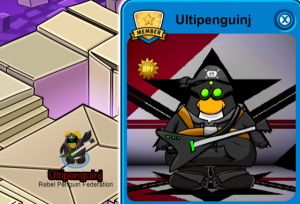