The End of the Strike Force

The Rebel Penguin Federation Strike Force was a division of the RPF available to those of rank Specialist and up, known for its efficiency and accuracy with tactics.  As of today, March 27th, 2020, we are shutting it down.

The Strike Force was established upon my return to the Rebel Penguin Federation in June of 2019.  At the time, RPF had little to no engagement with other armies and was simply a community that would pit its Navy and Air Force against each other once a week as a Branch Battle.  The Strike Force was meant to be a transition for RPF to regain its foothold in the community, while teaching its members about how to participate in an army community.

However, over the past nine months, RPF has slowly began to integrate itself more into the communities it has been in.  The Club Penguin Armies league and Club Penguin Army Media organization were both tremendous assets in this regard, allowing troops to familiarize themselves with how Club Penguin armies battled and competed for land.

When Club Penguin Armies began its decline, the use for the Strike Force became less and less.  There were still trainings held occasionally, meant to keep SF in fighting shape, but nothing more past that.  So, it became evident that it was time to transition Strike Force out, and begin moving towards training everyone in the Rebel Penguin Federation.  The period of transition had ended.

Now, we have reached the point where uniform training events can be exactly what Strike Force events used to be, trainings meant to sharpen our efficiency and skills for when it comes time to apply the effort to facing another army.  Everyone can now be a part of the community, not just those of Specialist and above.  More information on this will be coming soon.

If you were not around during the Strike Force or want to look back on all it has accomplished, several of the posts are linked below, as well as many of the amazing pins from the #strike-force channel. 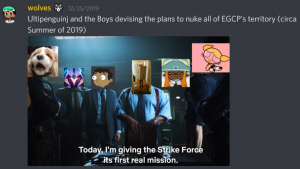